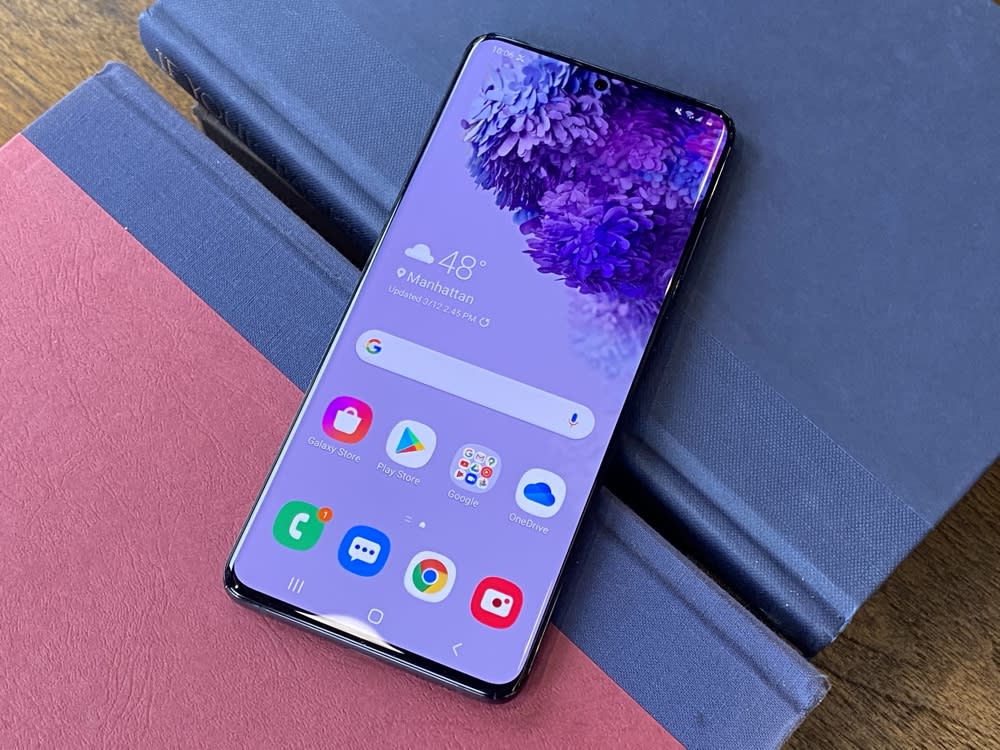 Each of the phones comes equipped with 5G capabilities, a first for the lineup, and packs upgraded cameras complete with powerful zoom functionality. We’ve already looked at the S20 Ultra, and its enormous 100x zoom camera, but most people are likely to opt for the S20 or S20+, rather than the ultra-expensive Ultra.

So what can you expect if you get an S20+? Simply put, one of the top Android phones around. With its powerful performance, pristine display, and exceptional camera, the S20+ is the best version of the S20 you can buy.

What’s different between the phones?

The S20, S20+, and S20 Ultra are largely similar outside of a few key differences. The phones all come with Qualcomm’s Snapdragon 865 processor, at least 12GB of RAM, and at least 128GB of storage. They also pack Samsung’s fantastic Infinity-O Super AMOLED display, and the same general design language.

But there are plenty of differences to account for the price discrepancies between the three, starting with their sizes. The S20 gets a 6.2-inch screen, while the S20+ gets a 6.7-inch panel. The S20 Ultra, meanwhile, gets a massive 6.9-inch display.

Then there’s the 5G functionality of each phone. The S20 is able to handle what’s called Sub-6 5G, which is the kind of 5G that is about 20% faster than 4G LTE and has greater range than millimeter wave 5G. But the S20+ and Ultra get both Sub-G 5G and millimeter wave 5G, which is the 1-gigabit-per-second type of 5G the industry has promoted so much.

When it comes to size and functionality, the S20+ is the right fit. It’s every bit as powerful as the S20 and S20 Ultra, but smaller than the Ultra, while offering greater 5G capability than the S20.

Rather than a bulbous protrusion from the rear of the phone like the S20 Ultra has, the S20 and S20+ get relatively flat camera covers. It’s a big improvement aesthetically, as the Ultra’s camera bump looks absurd.

In terms of overall photo quality, the S20+ still creates an exaggerated depth-of-field bokeh effect when taking macro photos, but it wasn’t as intense as I saw with the S20 Ultra. Outside of that, images were sharp and clear of artifacts. Colors were more intense in the S20+’s photos than those taken with the iPhone 11 Pro, though the Pro offered slightly better low-light shots.

As for that 30x zoom, which Samsung calls Space Zoom, well, it’s certainly more useful than the 100x zoom on the Ultra. Photos will still look pixelated at 30x, and you’re not going to get shots that you’d frame on your wall, but you still get a decent image of your subject.

To be sure, you shouldn’t expect to get the same photo quality as you would with a purely optical zoom. Space Zoom uses software to zero in on your subject, which means your images won’t look as crisp those taken only with optical zoom.

The S20+ is the best of the three phones in Samsung’s latest lineup. It packs the 5G capabilities of the S20 Ultra at a smaller size, and the more manageable camera of the S20. It’s still pricey at $1,199, and the fact that Samsung doesn’t include millimeter 5G on the $999 S20 is the main reason I’m recommending the S20+.

That said, it’s a fantastic phone that’s not too large, and worth picking up if you’re an Android fan who wants to get into the 5G smartphone game ahead of your iPhone-toting friends.