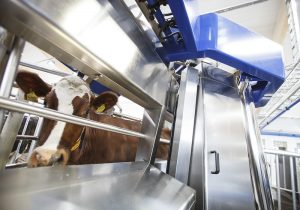 There are more than 35,000 RMS (robotic milking systems) in operation on various dairy farms across the globe. Milking robots can improve the efficiency of a farm and even allow it to expand while avoiding bringing in more workers.

There are a number of things that have an influence on the overall profitability of RMS, including savings in labour, machine lifespan, milk production, and the amount of daily milk produced per robot. The biggest downside is the initial investment required. Typically, the cost will be somewhere between $150,000 and $200,000. A robot is able to milk between 50 and 70 cows. According to data from the past, convention milking systems are more profitable than RMS. However, this may change going forward thanks to technological advances, improvements in management, and an increase in the cost of labour.

According to a 2016 report from the USDA, the wages livestock workers received went up by 3% during 2014 and 4% in the following year. The savings on labour due to RMS vary. Some reports find no significant savings, while others have found savings as high as 29%. One of the reasons there are variations in data may have to do with management and barn design. 2016 data from Farm Management Records found that, in the Upper Midwest, farms using RMS produced an average of 2.2 million lbs of milk for each full-time worker, while herds of similar size milked in parlours produced 1.5 million lb per worker (Table 1).

Labour availability has also influenced the decision of many farmers to transition to RMS. According to a survey from 2014, 51% of workers on farms are immigrants. (Adcock et al., 2015). If immigration laws become more strict, or if fewer foreign workers opt to work on farms, labour availability will decline. Solutions such as those offered by Fullwood Packo will become more attractive.

Transitioning to RMS Can Lead to Changes in Milk Production

The main reason that milk production changes after RMS is installed is that there is a shift in milking frequency. According to 2010 data from de Koning, RMS lead to production increases between 5 to 10% when compared against milking 2X, but had a decrease between 5 to 10% when compared against milking 3X. According to our data, the average milking frequency for RMS ranged from 2.4 to 3.2, with an overall average of 2.8. In order to improve efficiency, milking frequency should be higher during early lactation and lower during later lactation. Significant factors that have an influence on the average milking frequency for individual cows and herds are:

2007 data from Bijl et al. looked at how Dutch farms that utilized RMS compared to convention farms that milked 2X. Since costs were higher with RMS, standard farms tended to be more profitable. With that said, labour requirements on RMS farms were 29% lower, which lead to higher milk production and higher income per worker. The conclusion was that by making investments in RMS, farms could use less labour to produce more milk, milking more cows in the process.