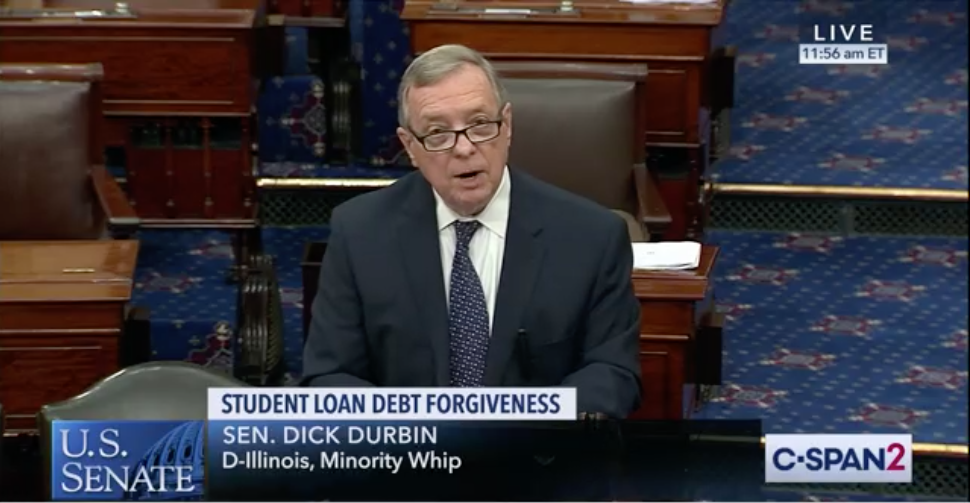 The GOP-controlled Senate passed S.J.Res.56, which is a version of a bill that reverses DeVos’ new rule on how her department processes debt relief claims made by students who had been defrauded by predatory colleges.

In January, House Democrats had voted to rejected DeVos’ new rules, using the Congressional Review Act. On Wednesday, the Senate voted to pass the Senate version of the House bill, 53-42, with 10 Republican votes.

Before the vote, Senator Dick Durbin (D-Illinois) emphasized how much was at stake for these students.

“Many of these students incurred substantial student debt based on the representations and misrepresentations of these colleges and universities,” he stated. “Now they find out the school shave gone bankrupt in some cases… here’s the student deep in debt having wasted years of their lives in these for-profit colleges.”

He added: “Students find themselves literally in chains with student debt.”

The borrower defense rule was written into law through the Higher Education Act in the early 1990s. It was meant to help victims of fraudulent schools seek relief.

Under existing law, borrowers with federal loans are eligible for loan forgiveness if a college or a university has misled them or engaged in other misconduct in violation of certain state laws.

In 2015, after the for-profit giant Corinthian Colleges fell, many former students decided to seek relief for their student loans through the rule.

More than 200,000 claims are now with the Department of Education (ED) which is responsible to decide who is entitled to the relief.

After assuming her position as secretary, DeVos overturned existing Obama-era rules and made it “intentionally difficult” for those applicants, Democrats stated previously.

But DeVos has previously defended her agency, alleging that the Obama administration had left behind a mess.

“When borrower defense arrived in 1995, it … was little used… in the 20 years from 1995 to 2015, fewer than 60 claims were filed,” she said during a previous hearing in front of the House Committee on Education and Labor. “Then the previous administration weaponized the regulation against schools it simply didn’t like. They applied the law in a discriminatory fashion. So since 2015, there has been a 5,000% increase in borrower defense claims.”

According to a report by the nonprofit Institute for College Access & Success, 53% of defrauded students’ debt was forgiven under Obama-era rules. That number fell to just 3% in DeVos’ term.

DeVos’ rule “makes it impossible for future defrauded students to receive the borrower defense discharge Congress intended,” argued Durbin. “These schools take the money and run, and the students end up holding the bag with massive debts.”

But President Donald Trump had already made it clear that he was going to veto the resolution if it made it to his desk. On Tuesday, he told Republican senators that he was “neutral” on the resolution, Politico reported.