Jacinda Ardern has accelerated the full reopening of New Zealand’s borders after declaring the Pacific country to be a “safe place” to visit only days after a poll revealed that her Labour party had fallen behind its main rival for the first time in five years.

The prime minister said on Wednesday that New Zealand was “ready to welcome the world back” as she brought forward the border reopening for vaccinated travellers from Australia to the second week of April and for people arriving from other countries that did not require a visa to May from July.

The earlier reopening was announced just six weeks after Ardern said the country would reopen gradually after a two-year period when it adopted one of the strictest approaches in the world to managing the spread of Covid-19.

“We are ready to safely move into a new chapter in our management of the pandemic,” said Ardern, signalling the end of the “Fortress New Zealand” era. She added the country had the lowest rate of deaths during the pandemic in the OECD.

Ardern’s popularity has waned since the start of the pandemic and last week her Labour party fell behind the National party in the polls for the first time since she was elected. She remained well ahead of her rival Christopher Luxon as preferred prime minister, according to the 1News/Kantar but her 34 per cent rating had fallen sharply from 58 per cent in 2020.

“Those glory days of Labour receiving 50 per cent support are well and truly over,” Bryce Edwards, a political analyst at the Victoria University of Wellington, said. “Those heights came at a time when New Zealand appeared to have eliminated Covid entirely, and there really was a renewed ‘Jacindamania’. Since then there have been a multitude of factors that have tarnished the record of the government.”

The ruling party’s popularity waned in part because of frustration over the lengthy border closures and the handling of a protest against vaccine mandates outside the parliament building in Wellington, which culminated in violence between the police and demonstrators.

The latest poll swing has been triggered by a sharp rise in the cost of living following the Russian invasion of Ukraine, which has sent the price of food and petrol higher. Luxon has promised a programme of tax cuts and has accused the government of acting too slowly.

Ardern admitted this week that there was a “cost of living crisis” as she reduced fuel taxes. 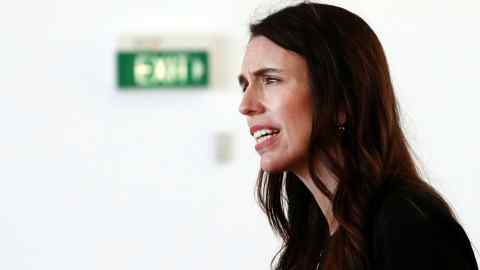 Edwards said that the government would be credited with being flexible and listening to the public on borders and “bread and butter” issues, but other voters might see the changes as “caving into pressure”.

Ardern said that she was particularly keen to welcome back Australians, who made up 40 per cent of total tourists before the pandemic struck, for the Easter school holidays.

Covid-19 infections in New Zealand had risen sharply since the onset of Omicron in December but fell last week to a seven-day rolling average of about 20,000 cases.